Board of Zoning Appeals

Be a Hero, Save a Hero

Issue 1 on the May 4th Ballot!

The City of Brecksville has placed on the May 4 ballot with the Cuyahoga County Board of Elections, a change in the city’s land use zoning map at the request of Sherwin Williams. Issue 1 was recommended by the City Planning Commission to City Council and legislation was introduced by City Council to have the issue appear on May 4 ballot. The legislation was read three times by City Council and was adopted by council and approved by the Mayor. The parcel of land that is the subject of this rezoning was not part of the original Valor Acres development, but was part of the Dalad-Crowland property which was ultimately sold to and is now the major part of the Sherwin-Williams property.

A 55% affirmative vote is necessary for passage.

“Shall the Zoning Map of the City of Brecksville be amended to change the zoning classification of a portion of the Sherwin Williams property located on Brecksville Road, part of PP# 604-08-008 from R8 Residential to O-L Office Laboratory classification?”

Mayor Jerry Hruby and City Council President Mike Harwood provide a joint statement: “The request of Sherwin Williams to rezone 18.1668 Acres of their land from its current Residential zoning to Office Laboratory will create uniform zoning for all of the requester’s Brecksville land; Therefore all acreage would be consistent with their intended use. With the passage of issue 1 this land then becomes part of the overall development plan for Sherwin Williams both now and for the future.” 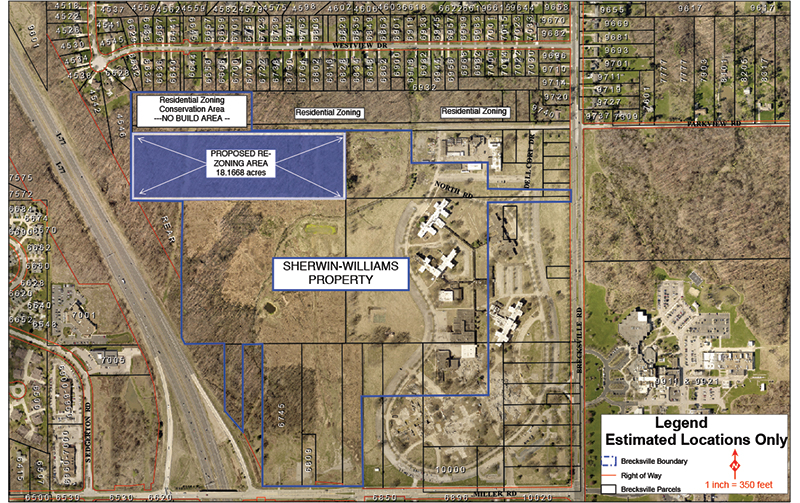 Back to Community News